People have always moved about. According to the World Bank, in 2015 there were about 250 million international migrants. Most have migrated to get work, most often in the same region or to countries with about the same welfare level. In 2015 record many people were also fleeing persecution, war and oppression: about 60 million according to the United Nations High Commissioner for Refugees (UNHCR). The majority are fugitives in their own country or in nearby refugee camps, while a small proportion make their way to other regions or continents.

It is often overlooked that half of the world’s migrants are women. Female migration has long been seen as an effect of men’s migration but women also migrate on their own account and for their own reasons, particularly in workforce migration. This often involves great risks of exploitation. Many of these women do housework under extremely poor and uncertain conditions. Rights and regulations for workforce migration must be strengthened. Union policy collaboration is important, not least globally, bilaterally. Sweden should ratify the International Convention on the Rights of All Migrant Workers and Members of their Families (CMW) and encourage other EU countries to do the same.

In addition, as fugitives girls and women are particularly vulnerable and run great risks of being sexually exploited and becoming victims of human trafficking. The refugee situation has uncovered major shortcomings in EU refugee policy. Sweden must actively promote the securing of legal routes to Europe and promote increased global responsibility for people who are compelled to leave their homes. The international community must also make greater efforts to master the reasons for flight, and to treat incoming refugees with dignity.

Owing to catastrophes and conflicts caused by climate change, we must be prepared for increases in the numbers of refugees. Global, regional and national responsibility is a must for securing asylum rights and preventing the undermining of asylum-seekers’ rights. Sweden must become a model country in this work.

A broadened feminist focus is needed in refugee policy, which must note women’s special vulnerability as refugees and strengthen judgements of women’s reasons for protection.  Sweden also needs to support the work for unaccompanied refugee children, both girls and boys, and for GLBT people who are refugees. Their particular vulnerability must be noted and their reasons for protection must get higher priority.

In line with international law and most people’s moral convictions, Sweden has undertaken to receive people in need of protection. S-kvinnor stands for solidarity in a world where the right to asylum is central. Asylum-seekers with reasons for needing protection must have the right to permanent residence permits and reunion with their families.

People who come to Sweden must be enabled to build their lives here. This necessitates a respectful reception and a well-functioning settling-in process. As soon as possible after arrival, asylum-seekers must be given a basic briefing regarding Swedish social life and the democratic values that govern this.

Early access to education, work experience or work is important so that people may as rapidly as possible earn an income of their own and power over their own lives. Here our folk high schools and study associations are an important resource and can act as a bridge into the community and working life. This also contributes to economic development and is profitable for the whole of society.

The state’s capacity to offer temporary dwellings should be such that the procurement of dwellings of doubtful quality at high prices is minimized. The Swedish independent living act (EBO) entitling asylum-seekers to compensation for dwellings they have arranged themselves must be revised. It must guarantee a dignified living situation and reduce segregation.

Children coming to Sweden must start preschool or school as soon as possible and receive support at their appropriate level. The period newly-arrived children spend in preparatory classes must be as short as possible so that they can move rapidly to ordinary classes.

Swedish for immigrants (SFI) needs to be made more flexible to take account of people’s differing backgrounds and requirements. To make SFI more effective the courses should be given already during the application period. This would speed up learning and make the waiting time more meaningful for the asylum-seekers. It should also be possible to study SFI during parental leave, chiefly to help women during their settling-in process. Child care should be offered as necessary for attending studies.

New arrivals’ education and experience must be utilized. Many who come here have knowledge and work experience which the Swedish labor market greatly needs. At the same time others have low levels of education and find it difficult to enter the labor market here. Efforts to help people settle in must cover everything from the validation of academic merits and work experience to initial literacy and the acquisition of basic knowledge. Improved and extended cooperation among the authorities is needed during the settling-in period.

It is especially difficult for women to enter the labor market. At the same time the special efforts offered to new arrivals such as entry level jobs, go predominantly to men. There should be a strategy for overcoming this dominance so that more women can share in the education and in working life.

It has been calculated that if women born outside Sweden were to enter the labor market as much as native-born women, the level of GNP would be 1.5% higher, unemployment one percent lower and public finances would be increased by about 37 thousand million kronor. That more get jobs and thus opportunities to support themselves, is a decisive factor for successful establishment in working and social life, and for increased economic equality between women and men. 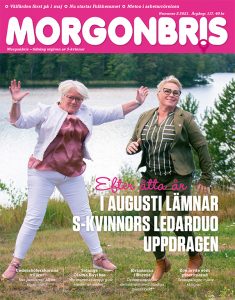